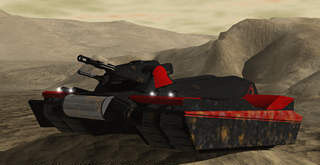 The Tick tank was Nod's main battle tank in the Second Tiberium War and the Firestorm Crisis.

The Tick Tank was Nod's main battle tank during the Second Tiberium War. It replaced the light tank from the First Tiberium War, with attention paid to their armor and attack power. While it was cheap and fast, it was surprisingly overpowered by GDI Titans on one-on-one battle, but its cost gave Nod the opportunity to build more and faster. The Tick has a front-mounted entrenchment tool. When entrenched the hull assumes a vertical position with the front burrowed into the ground. The tank becomes immobilized but benefits from greater protection and turret rotation.

Tick tank design somewhat resembles an assault gun, with limited capability to aim its cannon. It becomes a fully fledged turret when entrenched, relocating the propulsion power to the turret and entrenchment tool. Tick tank must entrench itself should it find altitude restriction to aim its cannon. The entrenched position actually makes the tank "stand up", giving its cannon a broader room and nullifying any height obstacles.

The Tick Tank was replaced by the Scorpion tank after the Second Tiberium War.

The Tick tank, despite being a lighter vehicle, requires as many credits (800) to construct as a Titan. It is beaten by the Titan in a pitched head-to-head battle, but odds become much better if it manages to engage the enemy in stationary mode. However Titans can sometimes hit it outside its range. Also, its burrowing ability offers the player a stand-in for laser turrets, albeit one that is not as effective against infantry but can be more freely-emplaced since it does not need adjacent base structures.

Community content is available under CC-BY-SA unless otherwise noted.
Advertisement